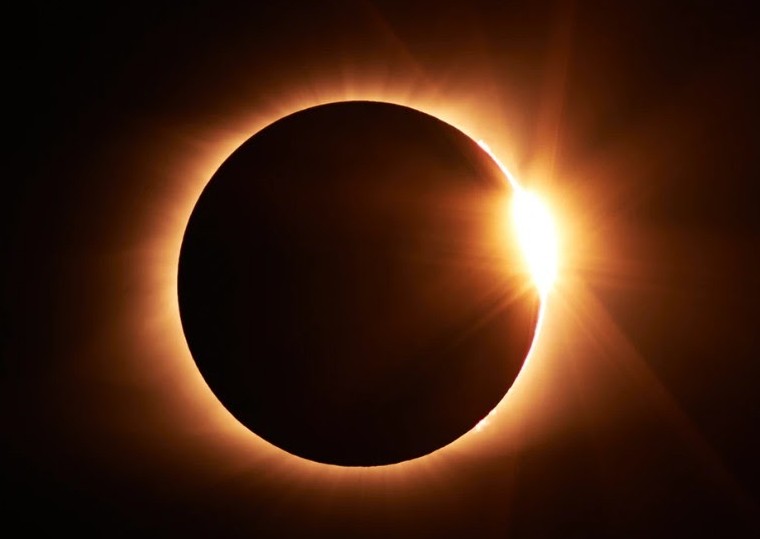 Fascinated by eclipses? Do you want to know some amazing facts about eclipses? An eclipse is a cosmic event when a heavenly body (like the moon, or any other planets or stars) blocks or obscures the light from another one.

For an eclipse to occur, there must be 3 astronomical bodies. So, one would block the light from the other one and then it will cast the shadow on the surface of the other celestial body. An eclipse is an extraordinary event, to say the least. It makes us curious.

So let’s fire away…

#1 Eclipse in the Ancient Time:

People knew about eclipses from a long time ago. However, they did not exactly know the reason behind a solar eclipse. As a result, ancient people would think that God might have got angry at them. Thus, something bad is going to happen. And, for saving them from God’s wrath, they would start to pray.

#2 To Look or Not to Look at Solar Eclipse

Normally, you should never look at the sun directly with the naked eye. The extreme lights from the Sun can even damage the eye permanently. And, you might think that you can take a look at the sun during a solar eclipse as the sun is little dimmed at that moment.

Matter of fact, you should never look at the sun with the naked eye whether it is a solar eclipse or not. Looking at the sun during an eclipse can damage the retina permanently.

The retina in our eye doesn’t have any pain receptors, so you will not notice anything until it is too late. Due to that, always use eclipse glasses or sun filters to look at the sun directly.

A total eclipse is a rare phenomenon. During this, the day would turn to almost as dark as night. That is why a lot of animals can’t tell the difference. They think that it is nighttime already.

For instance, the spiders start to dismantle their web, bats start to come out of their caves, giraffe starts to run, crickets start to chirping, etc.

Also, when the total solar eclipse ends and the sun come back, roosters start to sing. They think the night is ending and a new dawn is approaching. Interesting, isn’t it?

The Chinese word for the English word ‘Eclipse’ is ‘Rì shí’. Here the term ‘Shi’ means ‘to eat’. Why is that? Here’s the reason.

The ancient Chinese people would believe that monstrous beings like a dragon or a dog eat the sun during the solar eclipse. They even try to chase the beast by banging on drums and making other loud noises.

The ‘Baily’s beads’ phenomenon happens during a total or an annular solar eclipse. You will see beads of sunlight shining through the edge of the moon encircling it while the moon is covering the sun during the eclipse. Also, you might see a brighter Baily’s beads compared to all the others just before and after a total solar eclipse.

This is known as the ‘Diamond Ring’ phenomenon. Because it almost looks like a ring. This phenomenon was named by the English astronomer Francis Baily. He first noticed and talked about them officially back in 1836.

#6 Eclipse vs. the Length of the Day

People have been logging eclipses from ancient times. And, now, by collecting information from the ancient records, scientists have found out that the length of the day has increased by about 0.047 seconds compared to that time.

A lunar eclipse is not that hard to see. Because it is can be seen from anywhere in the world if there is night time. Granted, you will need a clear sky as well.

However, from some places, the entire eclipse might not be visible. In that case, you might see a portion of the eclipse. Another cool thing about the lunar eclipse is that you can look at a lunar eclipse with the naked eye.

And, if you are waiting for a total lunar eclipse or blood moon, then you might have to wait about 2.5 years after you have seen one.

Helium is one of the most abundant chemical elements in this universe. However, we didn’t know about Helium until 1868. The French astronomer named Jules Janssen discovered helium during a total solar eclipse in that year. Today, we can find helium in our Earth.

But at that time, we didn’t know anything about Helium’s existence on Earth. Rather, Jules Janssen found the first evidence of helium in the spectrum of the Sun’s chromosphere in August 1868. However, until 1895, we couldn’t find any evidence of helium on Earth.

Facts about eclipse continues below these related articles

The duration of a solar eclipse can range from a few minutes to several hours. However, the period of ‘Totality’ is a lot less than that. The peak state when the sun is fully covered with the shadow of the moon on Earth is known as the ‘Totality’.

During this period, the path of totality would be in total darkness. Interestingly, the duration of totality ranges from a few seconds to about 7 minutes and 31 seconds.

You can predict the eclipses of the sun, Earth, and the moon. Due to the position of these 3 celestial bodies, they come in the same position once after a specific period of time. For your information, this particular cycle is known as ‘The Saros’.

A total solar eclipse is possible due to specific positions and the sizes of the Moon, Sun, and Earth. For your information, the sun is about 400 times wider compared to the size of the moon. However, the moon is also about 400 times closer to Earth than the Sun.

That is why it is possible for a total solar eclipse to happen. However, the moon is drifting away from the Earth by about 4 centimeters every year.

In that regard, the moon will move so much far away that there will be no total solar eclipse on Earth anymore in about 600 million years.

Here is one fun fact about the eclipse for you. There was a total lunar eclipse back in 1st March 1504. That time, famous explorer Christopher Columbus was in Jamaica getting food and other necessary items from the natives.

But after staying there for about 6 months, the natives started to halt their supply. However, Christopher Columbus knew that a total lunar eclipse was on the way-thanks to the journal of Regiomontanus who was a German astronomer at the time.

And, as usual, the total lunar eclipse appeared in the correct schedule. As a result, the natives were scared and started to follow the order of Christopher Columbus. And, they began to come with all the provisions they had.

#15 Eclipse in Other Planets:

All the gas giant planets (Neptune, Uranus, Saturn, and Jupiter) have lots of moons. As a result, these planets also have frequent eclipses. Also, our neighbor Mars has over 100s of eclipses every ‘Earth Year’.

And, as planet Mercury and Venus don’t have any moons, there are not any eclipses at all. Even, eclipses occur on the dwarf planet ‘Pluto’.

Simply put, a solar eclipse occurs when our moon travels between the Sun and Earth; and casts its shadow to the Earth. On the opposite, a lunar eclipse will occur when our Earth goes between the moon and the Sun. As a result, the shadow of Earth falls on the moon.

Also, astronomers seem to agree that there are 4 types of solar eclipses. And, those are Partial, Annular, Total, and Hybrid eclipse.

Sun also has an atmosphere. And, the outermost part of the atmosphere of the Sun is the Corona. Because of Sun’s extreme brightness, the corona is always hidden.

If you have seen a total lunar eclipse, you would notice that the color of the moon can turn to red or orange. Why, though? It is because of the Earth’s atmosphere actually.

When the total lunar eclipse takes place, Earth blocks the sun from the moon. As a result, all the light of the sun goes through the atmosphere of the Earth to the moon.

And, as you know that all the colors are not of the same wavelength and thus they scatter through the atmosphere differently as well.

As a result, only the colors with the longer wavelengths i.e. orange or red can get through the Earth’s atmosphere and reach the moon’s surface. And that is why the moon looks reddish during a total lunar eclipse.

#20 During a Total Solar Eclipse:

When a total solar eclipse takes place, the environment in the path of totality can change dramatically. The temperature of that area will drop and the area would become dark as there will be no sunlight.

#21 After a Total Solar Eclipse:

As you know that a total solar eclipse can last for up to 7 minutes and 31 seconds. However, even after that period, the daylight will not be restored to its previous state instantly. In fact, you might have to wait about an hour or so for the full sunlight to re-appear.

Due to the size of the moon, it cannot cover the entire world with its shadow during a total solar eclipse. It can cover a portion of the Earth and that is known as the path of totality.

#23 Speed of Light vs. Eclipse

He noticed that the eclipses were occurring after about 17 minutes than the predicted time. From that, he deduced that the delay was due to the light to travel from Jupiter to Earth. This way he discovered the speed of light in 1676.

#24 The First-Ever Recorded Eclipse in History:

There is a debate on who was the first to record an eclipse in history. However, some scholars suggest that the Babylonians were the ones that recorded a solar eclipse for the first time. It was the eclipse that occurred back on 3rd May 1375 BCE. They could also predict the next solar eclipses using the ‘Saros’ cycle.

On the other hand, many historians seem to agree that the famous Greek philosopher and astronomer ‘Thales of Miletus’ was the first person in history to actually predict and record a solar eclipse in history.

Arguably, it was the solar eclipse that took place on 28 May, 585 BC. At that time, a war was going on between the Lydians and the Medes. And, this particular solar eclipse interrupted the war and both parties cam to a truce at last.

#25 The Next Eclipse Would be:

Astronomers can easily predict any future eclipses accurately. They can also tell from where the eclipse would be most visible, the path of the eclipse, the duration of the eclipse, and more. You can also know all about the next eclipses from NASA’s eclipse prediction site.

Before We Go. Cool Facts About Eclipse:

Eclipses are phenomenal. We all want to get to see an eclipse whether it is a lunar or a solar eclipse in our lifetime. If you are lucky, you might have already been a part of some eclipses already.

However, if you have not yet seen any eclipses, you can use the link above and know when you will be able to see the next eclipses from your location. We hope you have liked all these astonishing facts about the eclipse.